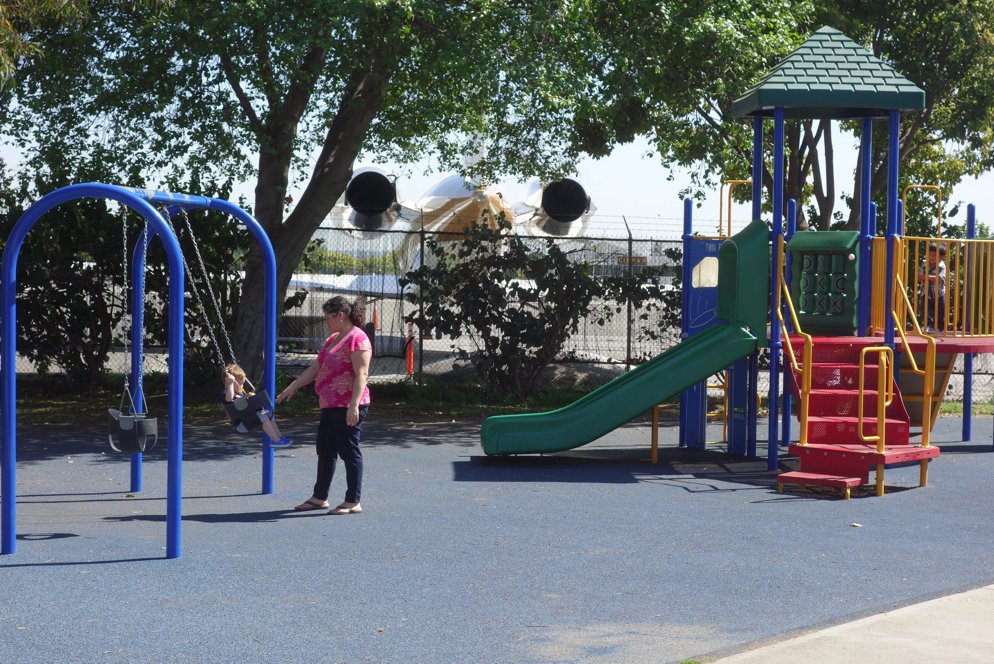 A children's playground shares a fence with the Santa Monica Airport. (Michael Brodsky)

The regular racket of propeller planes flying in and out of Santa Monica Airport is troublesome enough for many in the local community. Schools, playgrounds and culs-de-sac flank all sides of the runway, with some homes as close as 200 hundred feet away. But residents here, and near the almost 20,000 other general-aviation airports around the country, are now catching wind of a potentially more insidious problem posed by low-flying planes: toxic lead.

"I was shocked to find out that they still use lead in the gasoline for those airplanes," said Ericson Core, 47, who lives with his wife and 10-year-old son in the Venice neighborhood of Los Angeles bordering the small airport, which caters to recreational tours and flying schools.

"Those airplanes" that Core is referring to are the more than 150,000 piston-engine planes used for noncommercial flights in the U.S.

"We knew we were suffering from the general air pollution of LA," he said, "but we didn't know we were being subjected to a poison that is considered illegal in pretty much every industry in the U.S. except for propeller planes. That seems insane to me."

On Monday, three environmental health groups took action, filing a petition with the U.S. Environmental Protection Agency that calls on the agency to regulate aviation lead emissions. It is the latest move in a decade-plus public health campaign by Friends of the Earth, Physicians for Social Responsibility and Oregon Aviation Watch, including an initial petition and an unsuccessful lawsuit against the EPA in 2006 and 2012.

Aircraft are currently the leading source of airborne lead emissions in the U.S. While larger commercial planes and military jets use lead-free fuel, propeller planes that run on piston engines -- much like cars -- continue to burn leaded aviation gasoline, or avgas. Safety concerns are the main reason why planes still fill up with lead fuel. Two grams of tetraethyl lead are added to each gallon to increase the octane, which boosts performance, reduces wear and tear, and protects against "knocking," the spontaneous combustion that can lead to engine explosions.

Lead's anti-knocking properties were also the primary rationale for its former inclusion in automobile gasoline. The U.S. transitioned from lead to other anti-knocking agents, such as ethanol, beginning in 1973.

Once burned and emitted from the tail of a car or plane, lead from gasoline can contaminate not only the air but also waterways, livestock, crops and soil. What's more, the metal doesn't dissipate in the environment. The EPA reports increases in lead concentrations near airports that host piston-engine planes, including the Santa Monica Airport. The agency also echoes the U.S. Centers for Disease Control and Prevention's warning that there is no safe level of lead exposure, and it estimates that 16 million people live, and more than 3 million children attend school, within a kilometer of airports where avgas is used.

John Froines, professor emeritus of environmental health at the University of California, Los Angeles, and former director of the U.S. Occupational Safety and Health Administration's Office of Toxic Substances in the 1970s, noted that airport workers, such as those who pump the leaded gas, may face the most acute risks.

"The U.S. is one of the few countries that still uses leaded gas," Froines said. "This is an important issue." 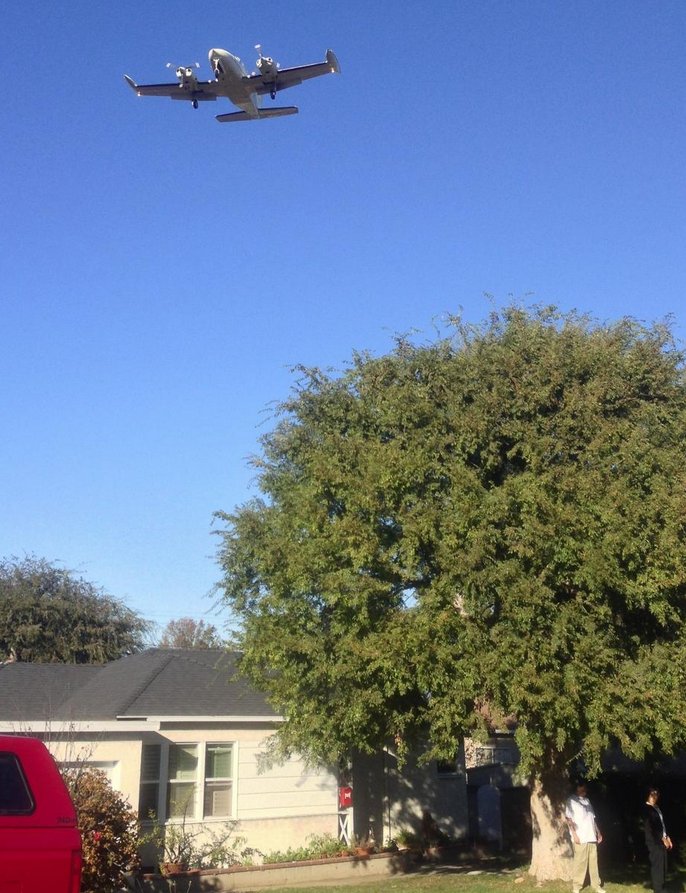 Still, the EPA is holding off on taking any regulatory action on avgas, which would begin with an endangerment finding -- that is, a declaration of an environmental health threat. An agency spokesperson told The Huffington Post that the EPA is waiting on completion of an ongoing investigation into "whether emissions of lead from aircraft may reasonably be anticipated to cause or contribute to air pollution that endangers public health or welfare."

The EPA intends to decide whether to make an endangerment finding by mid-to-late 2015, the spokesperson said in a statement, adding that the agency is also "carefully reviewing" the environmental health groups' petition.

The groups' new petition urges the EPA to act now. It points to research such as a Duke University study, published in 2011, that linked blood lead levels in children with proximity to airports, even after controlling for exposure to deteriorating lead paint and other sources of the toxic metal.

"We believe EPA has enough information at this point to make an endangerment finding," said Marcie Keever, legal director for Friends of the Earth.

Marie Lynn Miranda, now dean of the University of Michigan School of Natural Resources and Environment, was the chief author on that 2011 study. She noted that her team found children who lived within 500 meters of airports at which planes used leaded avgas had average blood lead levels more than 4 percent higher than those who lived at least 2,000 meters away.

"On average, 4 percent doesn't seem that high," said Miranda. "But even a small increase has the potential to be quite damaging."

The consequences of lead in the blood can be subtle. Reduce a child's IQ by five points, for example, and the child might be just a little slower to learn, a little shorter of attention, a little less in control of behavior and a little less successful on tests and at work. The kid's parents may never know the difference, but economists estimate that such a deficit could equate with $90,000 in lost lifetime earnings. Add that up across an affected population, and the toll of low-grade lead poisoning can be huge -- from that lost productivity to the costs of special education, incarceration and medical bills for a range of potential long-term health effects such as reproductive problems, cardiovascular disease and cancers.

"I understand that it's a safety issue," said Core, the LA resident, referring to the lead fuel currently required for some of the planes. "But they are also overlooking the people who live underneath these planes."

The kicker for people like Core: Only about 30 percent of the nation's prop plane fleet were designed in a way that requires high-octane leaded gas. These are generally the planes flown for business rather than recreation. The other 70 percent could fly safely with a basic unleaded fuel, as long as it is ethanol-free. Most available automobile gas in the U.S., however, contains ethanol.

Here is where market pressures come into play. Offering multiple types of fuel at these small airports doesn't necessarily pay off for runway owners -- especially when, as industry representatives note, the 30 percent of planes that need higher octane fuel burn more than 70 percent of all the avgas used.

While at least one group, the Aviation Fuel Club, is helping to push airports to make unleaded fuel available now, others in the industry believe the answer is a one-size-fits-all avgas replacement.

But without a federal push via an endangerment finding, little incentive exists for airports to expand their fuel offerings or for the industry to transition to an alternative fuel for the entire prop plane fleet.

Walter Desrosier, vice president of engineering and maintenance for the General Aviation Manufacturers Association, said that the industry isn't waiting for the EPA to make an endangerment ruling. They are already working with the Federal Aviation Administration to identify a lead-free avgas replacement -- a process they plan to complete by October 2018. A full transition to the chosen fuel could take years longer.

Decades passed, for example, between scientist Clair "Pat" Patterson's discovery of the threat posed by lead from automobile emissions and the federal government's phase-out of the toxic heavy metal as a fuel additive, a process completed in 1995. This week's episode of the documentary TV series "Cosmos" discussed Patterson's accidental finding while measuring the age of the Earth in the late 1940s and early 1950s, and his subsequent frustrations in trying to reduce the public health hazard in the face of industry opposition.

"We got lead out of automobiles," said Keever, of Friends of the Earth. "That was huge, and you can see the benefits in IQs of kids. But we still have to take care of this last major source in fuel."

'Now Where Did I Put That Bunting?' – Stars React To Boris Johnson's Resignation